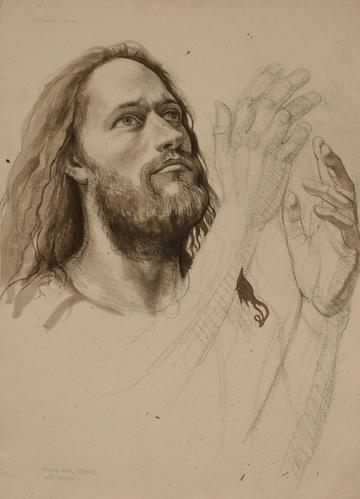 Roger Allen Nelson is an accomplished artist trained in classical realism, who has been led by his talent and passion into the demanding, meticulous medium of fresco.

Having earned a degree in Fine Arts/Art History from the University of Minnesota, Nelson began his artistic studies in 1972 at Atelier Lach School of Fine Arts in Minneapolis.  The school traces its roots to Jean-Auguste-Dominique Ingress (1780-1867), a realist and naturalist with a penchant for adding quaint eccentricity to his works.

Studying first in the French academic tradition under Richard Lach and Ives Gammel, Nelson began developing a taste for larger work and public art, when he was commissioned by the City of Minneapolis to design and paint murals.

After buying a home and land in the North Carolina Mountains, he turned his skills toward carpentry and renovation.  Soon, Nelson was being asked to draw plans, elevations and renderings for local architects.  This led to an invitation to provide set designs and drawings for the movie, “The Winter People”, based on a story by John Ehle and filmed in Cranberry, North Carolina.

Each step was leading to a turning point in Nelson’s life - his introduction in Charlotte in 1989 to world-renowned fresco master, Ben Long. Work was underway on a fresco at St. Peter’s Catholic Church when Nelson signed on as a volunteer assistant.  It soon became apparent that he was well-suited for his assignments.  He was ultimately named Chief Associate Artist to Long, working with him on frescoes in North Carolina and in France.  Nelson also joined his mentor as an instructor at The Fine Arts League of Asheville, where he taught Artistic Anatomy and Life/Figure Drawing.

The artist and his wife, Nancy, make their home near Blowing Rock with son, Aaron, and daughter, Rachel.